In order for bagpipes to perform well, and to help ensure steadiness of tone bagpipe maintenance is key. Joints must be hemp properly so they are airtight but movable. An under-hemped joint will leave the joint movable and not air tight, both of which contribute to an unsteady sound. An over-hemped a joint will put undue pressure on the wood risking cracking and/or seized joints. There are varying thoughts on which type to use with arguments for and against, however, the following has served me flawlessly for years and continues to do so.

I am not in favour of pre-waxed hemp as it is very greasy and with time becomes very smooth and relies on a very tight joint to give a seal. A great recipe for wood splitting as it contracts with the climate. Un-waxed hemp has a natural give in it that will move with the wood.   In addition, when pre-waxed hemp is coated with cobblers’ wax the two substances dilute and mix leaving a sticky mess and the pre-wax does not allow the cobblers wax to penetrate the hemp.

Un-waxed hemp also provides help with moisture control, the moisture that condenses on the inner surface of the stocks and drones is drawn by capillary action in to the hemp.  Providing the joint has been made in the manor described on this page it will not overly swell and give you a seized joint.

In addition the waxed hemp does not allow the wooden joints to “talk to each other”. Tonal quality is influenced majorly from the wood. Pre-waxed hemp seems to dampen the ability of the wood to couple acoustically. Talking rubbish I hear you cry…. Each to their own, try it and see, you will notice the difference ! In any event what ever you decide to use the method is the same.

Time taken to apply the layers of hemp in an even manor is time well spent. Ensure that each strand is placed next to the other with no gaps, applying firm pressure as you do so.

Apply one layer of hemp then roll the joint between two hard surfaces, eg table top and piece of wood, to bed the hemp in place. This helps greatly in avoiding having to "top up" the hemp a week later when it has compressed itself. 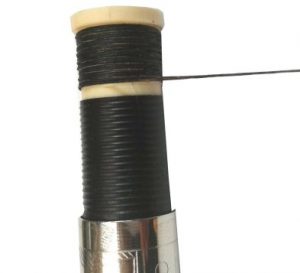 Un-waxed hemp and cobblers wax are the main components. Coat enough hemp with cobblers wax to make the first neat layer of hemp on the joint. Once this initial layer is complete roll the joint between two hard surfaces, this will leave a nice compressed layer as a base for the next one.

Repeat this for the next layer. This provides a good base that will last for years and years and when its time for a re hemp then only the top couple of layers will need replaced. Repeat this layering and rolling as many times, as is necessary. Finish off by making the last two layers of your joint with un-waxed hemp.

On stock joints make the last three layers in un-waxed hemp. This is allows moisture collecting in the stock to wick into the hemp which assists a little with moisture control and ensures an airtight seal without the risk of over swelling that would be caused if all layers were un-waxed.

The videos below were made following a request by the Pipe Major of my band, Inveraray and District, to demonstrate to fellow members my methods used in achieving the instrument that I have.

Always roll a layer of hemp between 2 hard surfaces before proceeding with the next layer.

2nd layer of cobblers waxed hemp being applied after rolling the bagpipe joint.

Final layer of un-waxed hemp being applied. Remember to roll in between every layer.

The result is a bagpipe that is not a struggle.

On tuning pins leave only the last two layers un-waxed and finish these off with a very small application of PTFE tape. This PTFE tape provides a thread like base, which makes fine-tuning very accurate. Some will argue against this for a variety of theoretical ideas however having used this for well over 30 years without problem I would strongly recommend it....the choice is yours... but never use this tape on stock joints. How tight to make a joint

Remember that good bagpipe maintenance is one of the key factors in keeping a steady tone. Joints should be checked regularly to ensure that they are in prime condition. Climatic conditions have a major influence on joints as this changes the dimensions of the wood which shrinks and expands, pipes that are new will experience a slightly greater change in the initial 15 to 20 years but they will always change.... even after 100 years of playing. You will find at times you have to add a few turns of hemp and at other times you will have to remove a few turns. This is perfectly normal.